Everything You Wanted To Know About Singer Featherweight Machines

<![CDATA[Lloyd Askew and <em]]&gt;Lloyd Askew and Aspire is a popular vendor at Road to California. Lloyd&#8217;s knowledge about and access to selling Singer Featherweight Sewing Machines is incredible. For the past 25 years, Lloyd has been selling, repairing, and offering clinics to owners and quilt guilds on Singer Featherweight machines.<a href="https://www.road2ca.com/blog/vendors/everything-you-wanted-to-know-about-singer-featherweight-machines/attachment/askew10/" rel="attachment wp-att-5976"> 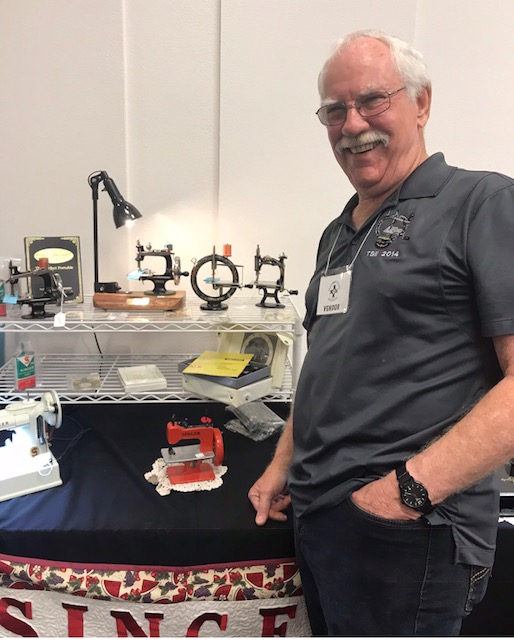 How did he become such an authority on Singer Featherweight machines? By accident of course. Twenty-five years ago, Lloyd’s wife just wanted a Singer treadle machine for “decoration” for their home. As they hunted for the machine, Lloyd became “hooked” on the history and background of the industrial revolution and the early Singer machines. His interest than evolved in to a business which he started while still working in the corporate world. He has since retired from his corporate job but continues to maintain his Aspire business that includes a Featherweight Museum in his home in Anaheim, California. He has on display over 100 machines dating back to the 1850’s (pre-Civil War) as well as antique cabinets and other early Singer products. 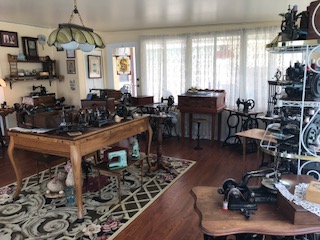 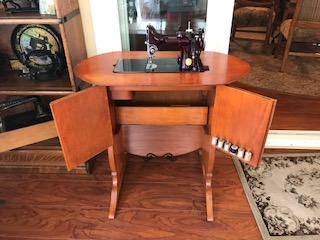 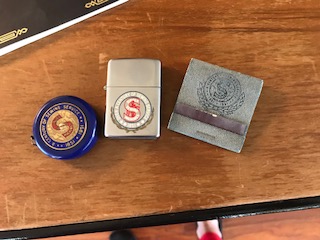 Lloyd enjoys sharing the history of early sewing machines. He related how in the early 1850’s, there were four sewing machine manufacturers: Wheeler and Wilson, Grover and Baker, Howe, and Singer. They were all fighting over patent rights for their machines and ultimately joined forces to form a “patent pool,” creating a monopoly on sewing machine manufacturing. Ultimately, Singer rose to the top and after 1860, they had blown the competition out of the water by not only offering superior machines (they developed an assembly line process before Ford) but also new business concepts like trade-ins and payment plans. Lloyd said, “Their marketing was “incredible.” 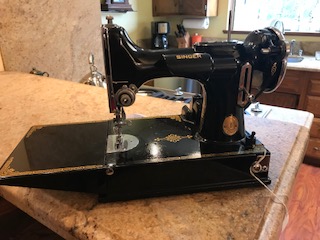 The first Singer Featherweight machine was offered on October 3, 1933 during the Great Depression. It weighed 11 pounds and cost $125. Singer Featherweights were produced from 1933 until the late 1960’s. Lloyd often plans his vacations around getting Singer Featherweight “stuff.” He has traveled internationally to Paris, England, and Germany. In the States, he has the best luck in the New England States. Lloyd does not advertise his business nor does he have a website. Customers find out about him by word of mouth or when he has vendor booths at quilt shows like at Road to California. Because Lloyd doesn’t want “to leave my customers without service,” he currently has 2 apprentices that he is training including his grandson-in-law and his neighbor, Mario Ceballos aka “Mr. Featherweight.” 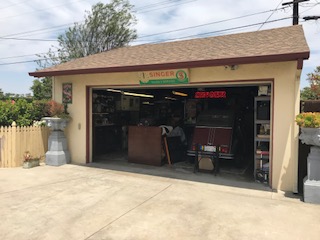 He also works with a painter who helps Lloyd customize Singer Featherweights to customers’ specifications like this beauty: 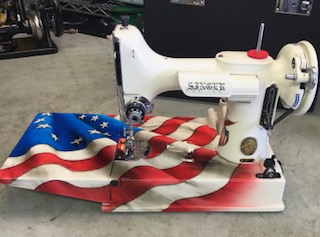 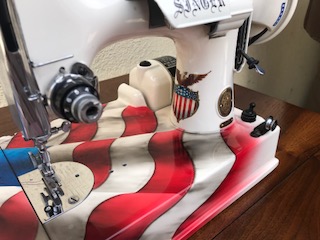 Tiny stitches on the flag 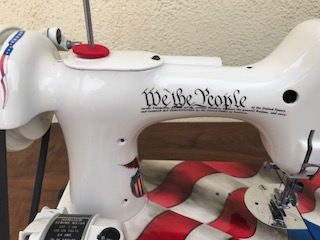 Even the Declaration of Independence!!

For collectors or anyone else interested in learning more about Singer Featherweight machines, Lloyd refers people to the International Sewing Machine Collectors Society, of which he is a member. He also likes to refer Featherweightshop.com in Idaho, a family owned business that is very knowledgeable.
Two publications that Lloyd has found that have invaluable information are A Capitalist Romance: Singer and the Sewing Machine 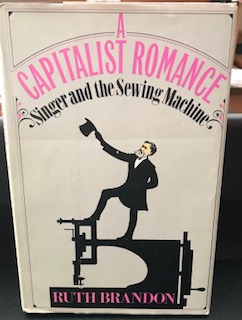 And, Featherweight 221- The Perfect Portable and Its Stitches Across History 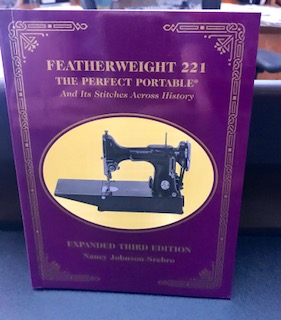 Of course, Lloyd also welcomes customers to contact him personally at laskew9243@gmail.com

Lloyd says he “enjoys immensely” his fascination and business with Singer Featherweights, helping customers find and maintain this incredible machine that has the “perfect straight stitch” ever made. If you’re interested in Singer Featherweight machines, be sure to visit Lloyd in his Aspire booth at Road 2019.

What Happened on Registration Day?!?

<![CDATA[We have received a lot of feedback (both negative and positive) about our online registration system. The new system that we rolled out in 2018 was far from perfect – and we knew that. Good computer software takes time to build and in order to remain “good” requires constant attention.<a href="https://www.road2ca.com/blog/road-to-california/how-to-register-using-road-to-california-online-system-v2-0/attachment/image1/" rel="attachment wp-att-5936"> 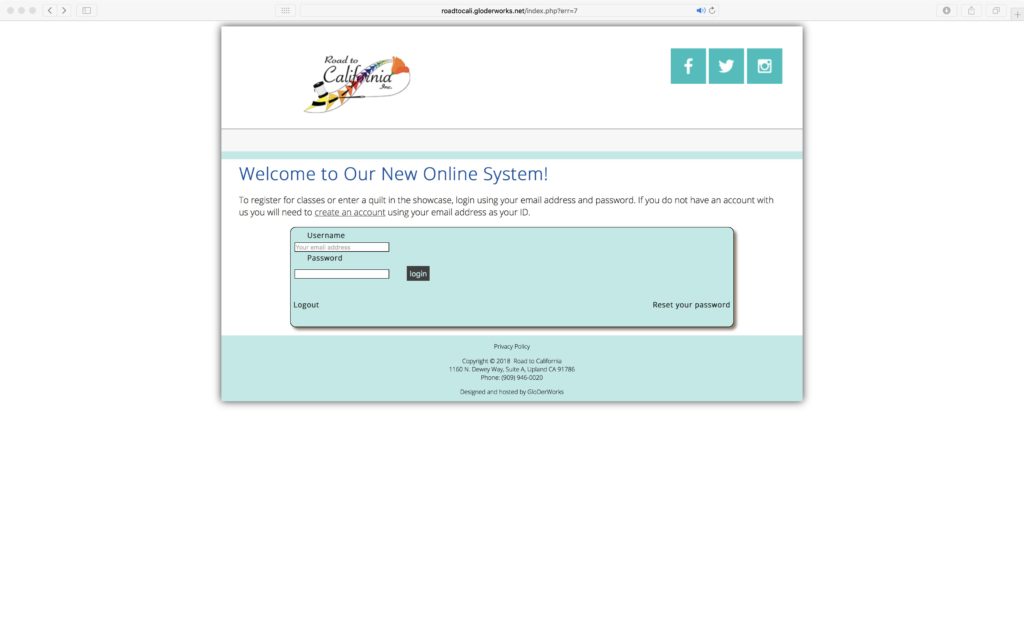 The old online registration system was an industry leader for many years and served us well. We were the first Quilt Show in the United States to have automated class registration, quilt jurying online and a dedicated application for return quilt shipping. For all its greatness – the old online registration system required some necessary updates that would have had to be addressed sooner rather than later. So, now you know the “why” we switched. Here’s the “what happened” to our new online registrataion system on Saturday morning, July 14th, and why it wasn’t really all that uncommon of an experience considering today’s technological world: Road’s software is hosted in a world class server farm. Our hosting package is one that  grows with our demand. On Saturday morning, the server was not even close to capacity, yet as many of you experienced, it acted like it was. What we discovered was that  there is one tiny setting in the web server that limits the number of active sessions that the server will allow. The web server was receiving over 500 requests per second – way more than the default setting on the server. We had over 2,000 eager quilters at the SAME TIME trying to register for their favorite class, causing the congestion that some of you and us in the office to experience. 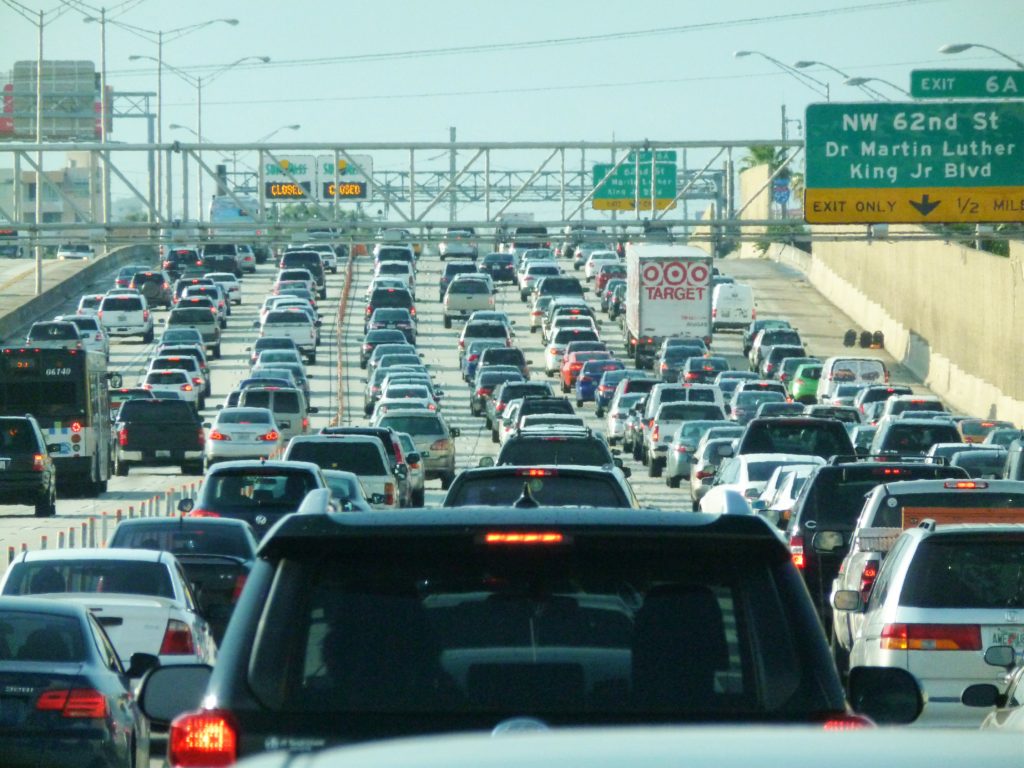 In other words, think of trying to merge onto a crowded freeway that is at a standstill. You can’t go anywhere and you’re extremely frustrated but once the flow of traffic improves, you are able to navigate to your final destination. What happened that Saturday morning was similar to a crowded freeway, except the server was taking who clicked first at that particular point in time, not who was first in line like on a busy freeway. To put our situation in perspective, Amazon also experienced this kind of problem on their Prime Day. It’snot an excuse, but if a multi-billion dollar company like Amazon can have these issues – anyone (like Road) can too. 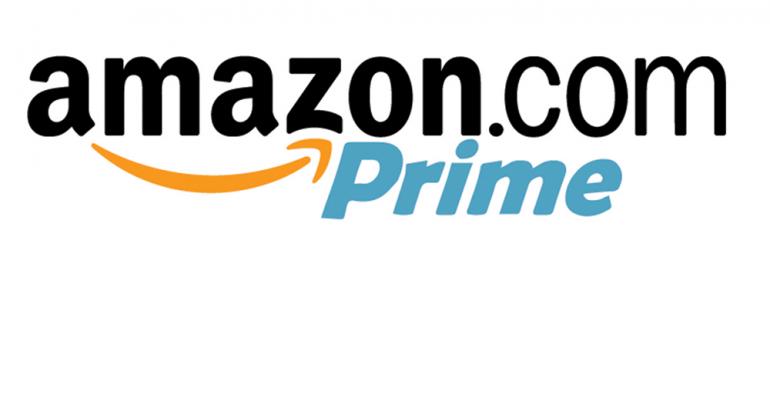 We learned a lot through this experience. Ever since, our developer has been inserting additional code into the new online registraton system to speed it up and make the process smoother. We also have appreciated the additional suggestions we’ve been receiving from our users and are attempting to include many of them in future releases of the software. The bottom line is, our new online registration system is better than ever before to serve you. More positive changes are planned in other areas to continue to enhance your Road experience. We are grateful for all our valued customers and their enthusiasm for Road 2019. It’s going to be an amazing show.

Going To Road’s Quilt Show Is Always A Holiday

Anytime you plan to meet friends at Road’s Quilt Show, it’s like creating your own special holiday: 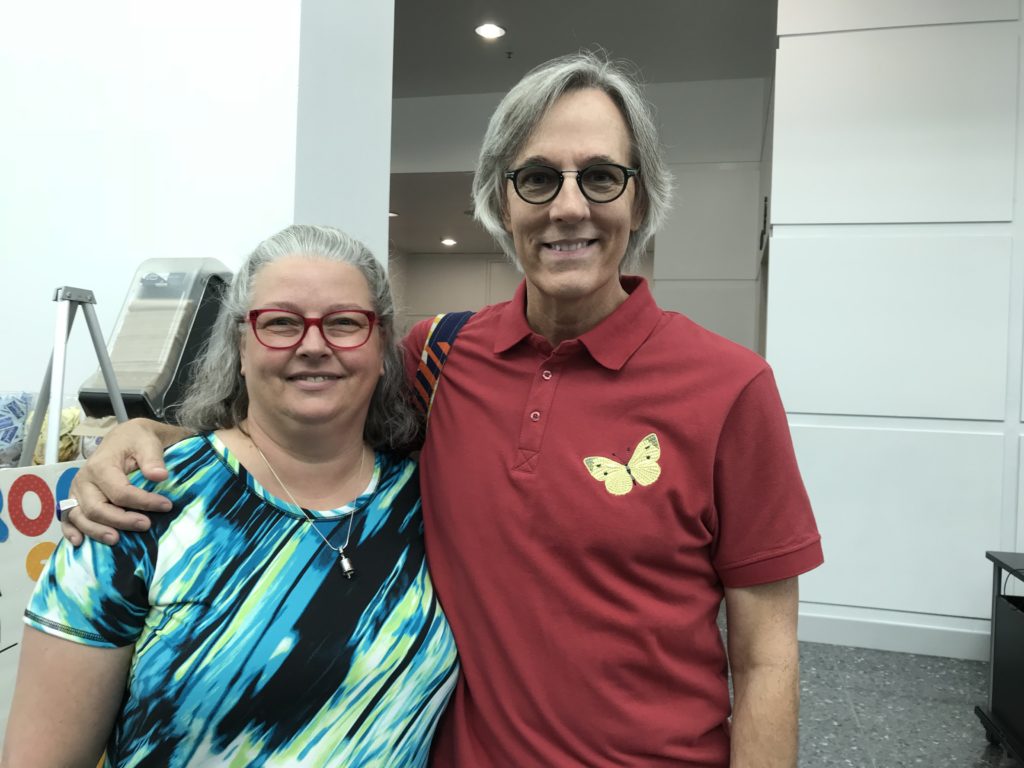 Robert Tucker and Patricia Young are quilt guild friends. They belong to the Coachella Valley Quilt Guild which meets in Palm Desert, California. Robert lives in Palm Springs year-round while Patricia is a “snowbird” who resides in Wisconsin. Road to California was the first quilt show Patricia ever attended and she’s been hooked ever since her first show in 2014. Patricia likes how convenient Road to California is to get to. She enjoys seeing the varied work on display and all the places to shop while at the show. Robert has joined Patricia at the quilt show the last 3 years. He likes seeing fellow guild members’ work on display. At Road 2018, three members of the guild had quilts entered in the quilt show. Robert is an artist but when he moved to the desert he wanted to try something new and meet new people. While attending the Big Bear Quilt Show, they put him in touch with the Coachella Valley Guild and Monica’s Quilt and Bead Creations (one of Road to California’s popular vendors). He likes how quilting has become another way to express his artistic talent. 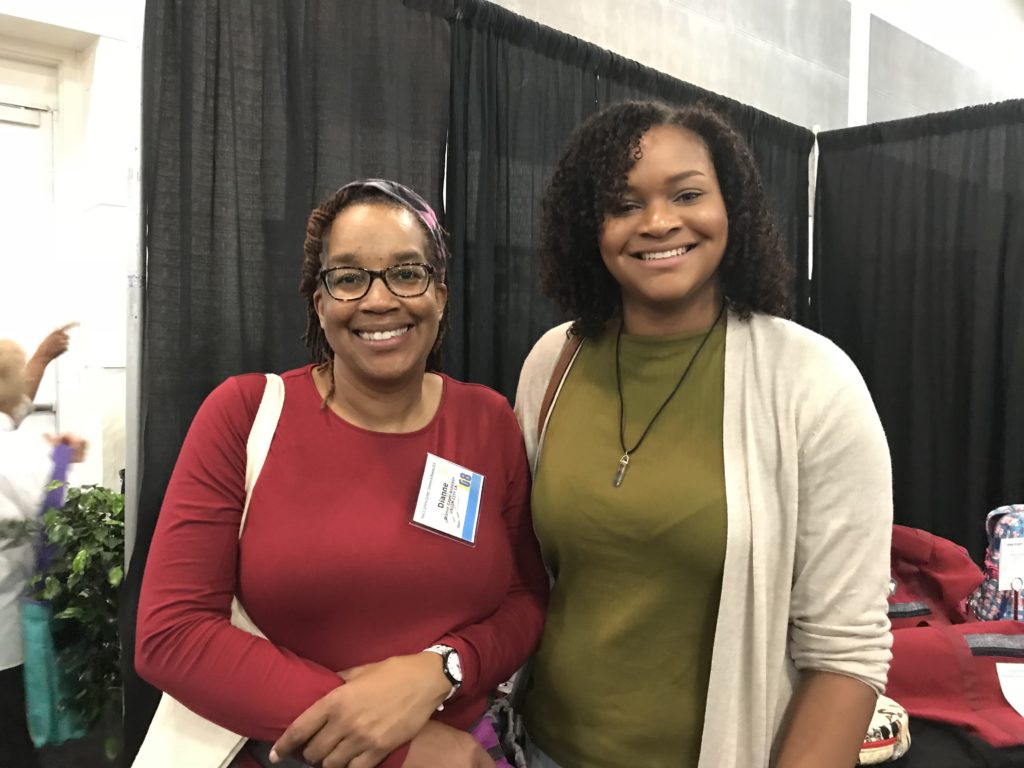 Simone and Dianne are both originally from the Bay Area although Simone has since moved to Pomona, California. They met and became friends through Simone’s mom who is Dianne’s best friend. Dianne has been quilting for four years. Her grandmother was a quilter and it was something Dianne always wanted to try. She finds quilting to be very relaxing. Road 2018 was the first time Dianne had come to the show and she wanted to bring Simone with her. They couldn’t believe how “gigantic” the quilt show was. Simone said she could tell a lot of work went in to each piece on display. 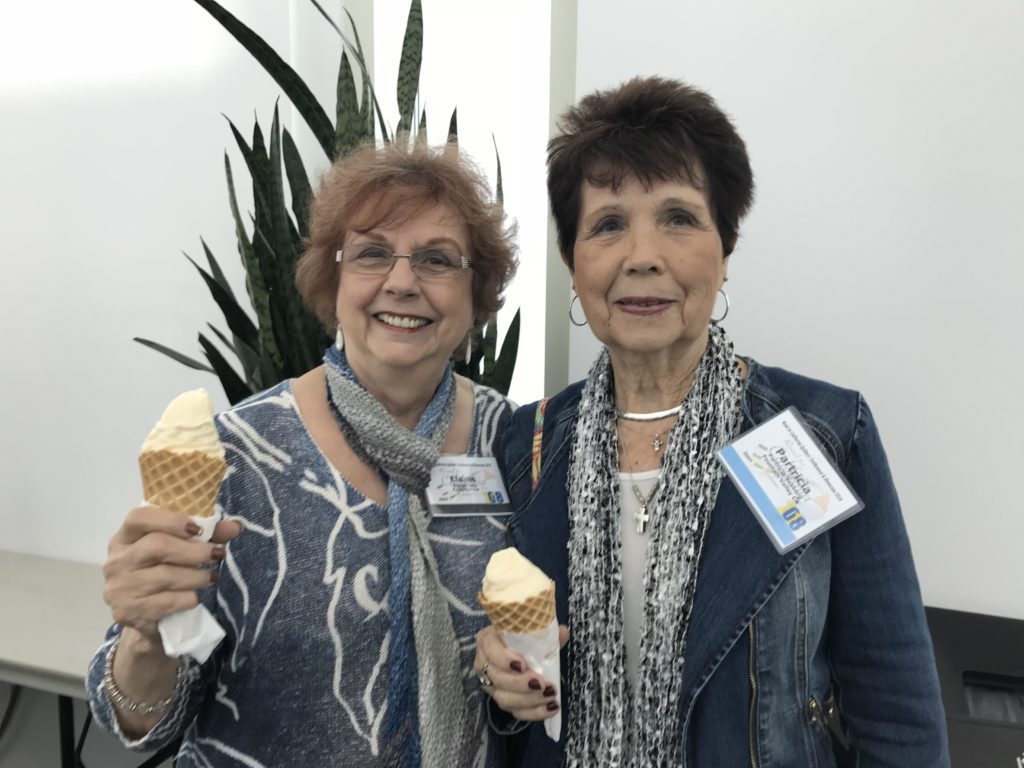 Elaine and Pat say that Road to California is a great place to have “great friend time.” “We wouldn’t want to go to Road without each other,” remarked Elaine. They take classes and share with each other what they have learned during their time at the quilt show. They also enjoy attending Preview Night to see all the quilts on display without the daily crowds. Elaine has been coming to Road for ten years and Pat for eight. “Road has everything we want in one place,” said Elaine. 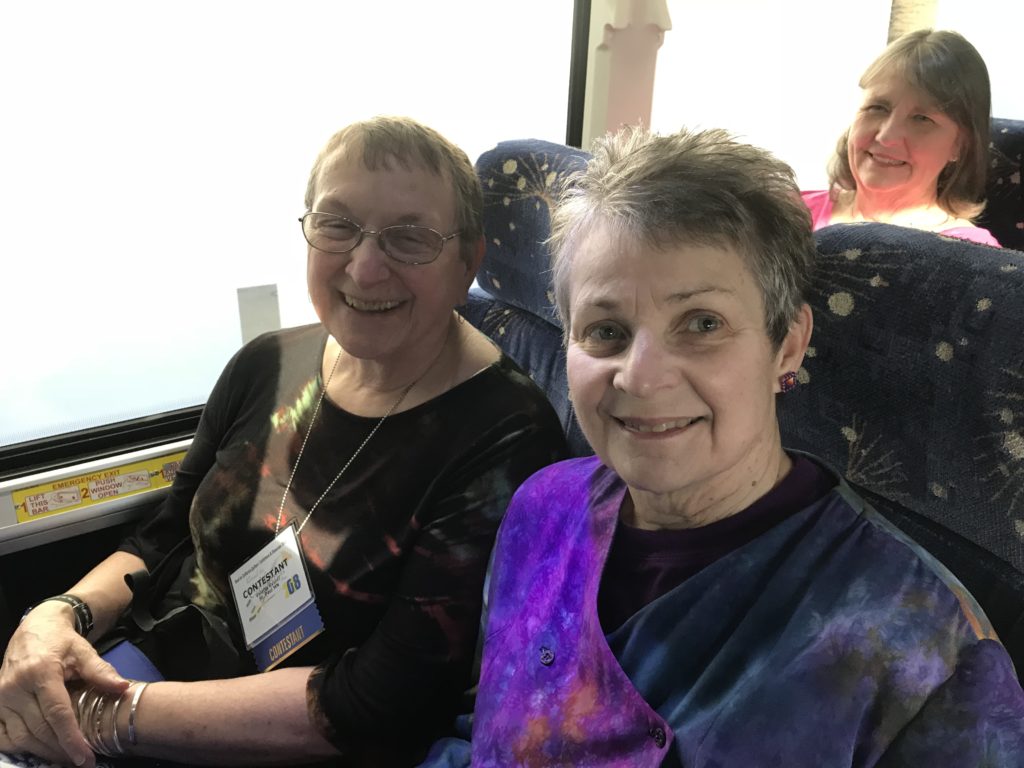 Val and Mary Beth have traveled together from St. Paul, Minnesota to attend the quilt show the past five years. They met while teaching for the same school district; Mary Beth taught Special Education and Val taught Home Economics. Both are long time quilters who like seeing all the different quilts and accessories that they don’t usually find in Minnesota. Have you made your friendship “holiday plans” to visit Road to California 2019?    ]]>