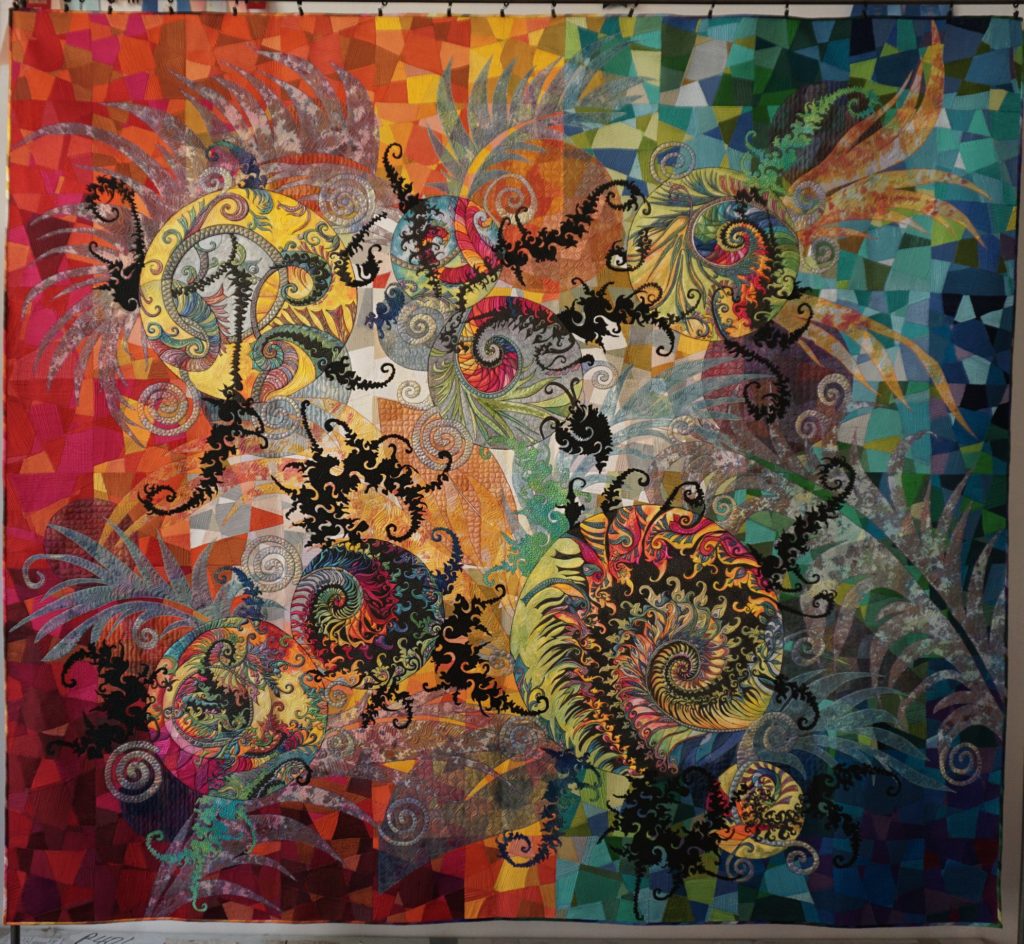 Claudia Pfeil is a quilting pioneer in Germany.

She made her first quilt in 1984 without the now common rotary cutter and rulers. As she remember, “There was much “trial and error” as I taught myself the tricks of making templates and seams.” This quilt ended up being her only large sewing project for many years. Claudia studied textile design at the University of Applied Sciences Niederrhein. This work drew her interests into different directions. She got the “quilting fever” –  but didn’t know it at the time. In 1992, with the birth of her first son, Julian, Claudia decided that the work she had done in the textile arena would go in a new direction.  She started by going through her drawers and bins, uncovering  her “hoarded” treasures that she had been collecting over the years.  One of her treasures that she found were handwoven fabric pieces that she made while attending university, on a 16 shaft loom. She was dedicated to giving those 30×30 cm (almost 12 inch) blocks a new “right to exist“ in a quilt! Because she didn’t have the “proper ‘yarn’ for sewing,” Claudia went to the local sewing shop where she was introduced to her first rotary cutter, mat and quilting ruler.  Content with her  “learn by doing” approach, those experimental times gave her the courage to improvise.  She took her finished quilt to the sewing shop and immediately, the owners asked her to teach them her technique!!  Looking back, Claudia says she has “to smile about my self confidence without having any clue!” It didn’t take long for Claudia to start buying and selling fabrics; first in the basement of her house, then in 1997, renting a small location in town where she opened Quilt & Co.  In 2002, the shop was moved to a larger – and current – location in Krefeld, Ritterstrasse. 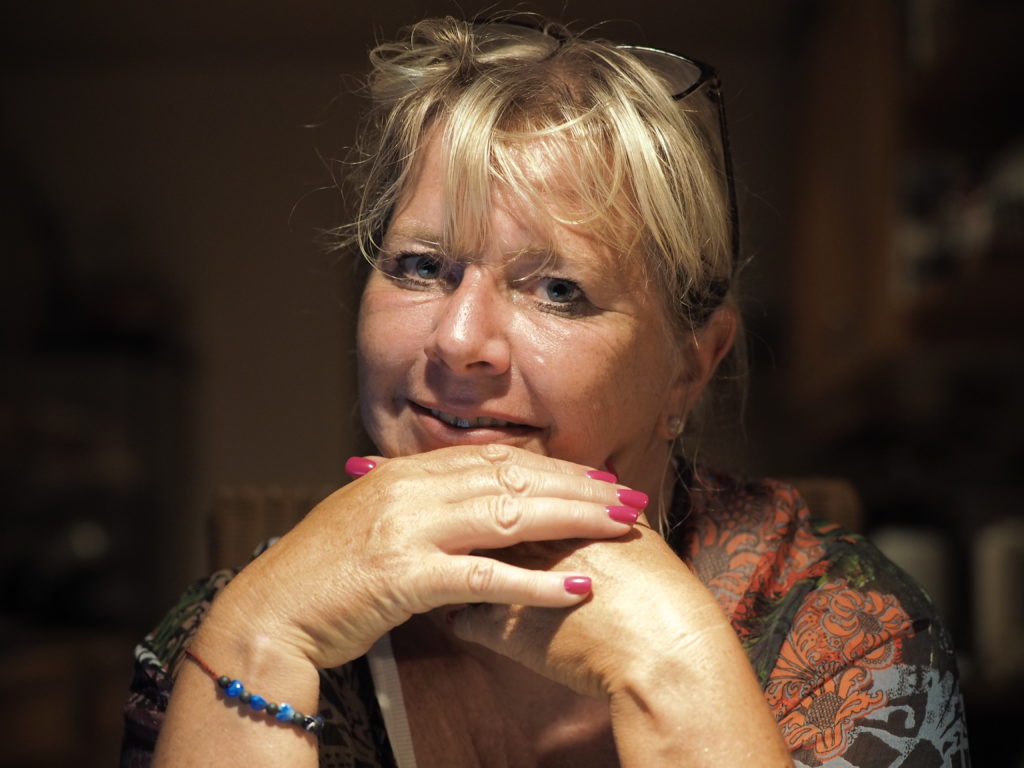 The fall of 2004 totally changed Claudia’s world. She had brought Quilt & Co.  as a vendor to the French quilt show, Carrefour du Patchwork. Next to her booth was APQS. She played everyday on their Millennium quilting machine and was hooked with longarm quilting. She purchased her longarm machine in 2005, finding a way to “express myself through fabric and thread that was exciting, addictive and fun.” Claudia says free-motion quilting gives her the freedom–“like an eagle flying over the mountains”– to play with spaces and quilting designs. When Claudia begins a project, she likes to work with a theme. Themes challenge her, get her out of her comfort zone, and start her thinking “out of the box.” Her theme for Fractal was kaleidoscopes. Claudia searched Google for pictures of kaleidoscopes and endless links introduced her to fractals. She admits that before then, she really didn’t know what fractals were.  She became fascinated by their dynamic , vitality and vibrancy. Before falling asleep at night, she would collect dreams and visions of her theme and began thinking about how she could translate her visions into realistic designs. She began by preparing circles in different sizes out of white Dupioni silk on freezer paper templates. Next, she drew designs on to the circles, first with pencil, then if she was satisfied, she drew them with a black pen (Faber-Castell)  filling in the details and painted them with acrylic colors              (Stewart Gill) and Tsukineko ink pens. Playing and creating  the layers is one of the main parts of the quilt. She tried to enhance this impression with the choice and placement of quilting designs. Using 100 wt black silk thread, it took several backtracking stitches around the outlines of the circle designs to repeat and enhance the  black drawing lines. The design was couched with different yarns ( for example Razzle Dazzle and Yli ) around all outlines, respecting again the different layers to create a foreground and a background. Her final touch? 30,000 Swarovski Crystals!!! Claudia says her entire process took approximately 10 months to complete. Besides learning about fractals, Claudia also learned by trial and error how to use mixed types of ink and paints and pens while making Fractal. She commented, “I learned that it is hard to get rid of pencil drawings on silk.” When she received the news that Fractal had won Best of Show, it was around 5:00 AM in the morning in Germany. Claudia said she woke up “unintentionally” to check the time on her cellphone and saw that she had received several messages on Facebook telling her of her award. She went downstairs, opened her email and saw the official announcement from Road. Claudia said she was “shocked” when she found out she had won. Where does Claudia go from here with her quilting? “I am working on my new project for 2018. I am bit behind my own time schedule this time. But the quilt is loaded on the machine and waiting to be quilted. In May, I will travel to the USA  to teach at several APQS Showrooms in Raleigh, Louisville, Austin and Dallas. In November, I will be at Quilt Festival in Houston and…. I am soooo hoping to be back at Road to California next year!” Congratulations Claudia Pfeil for your outstanding entry.

Shannah's Cameo: The Story Behind The Quilt 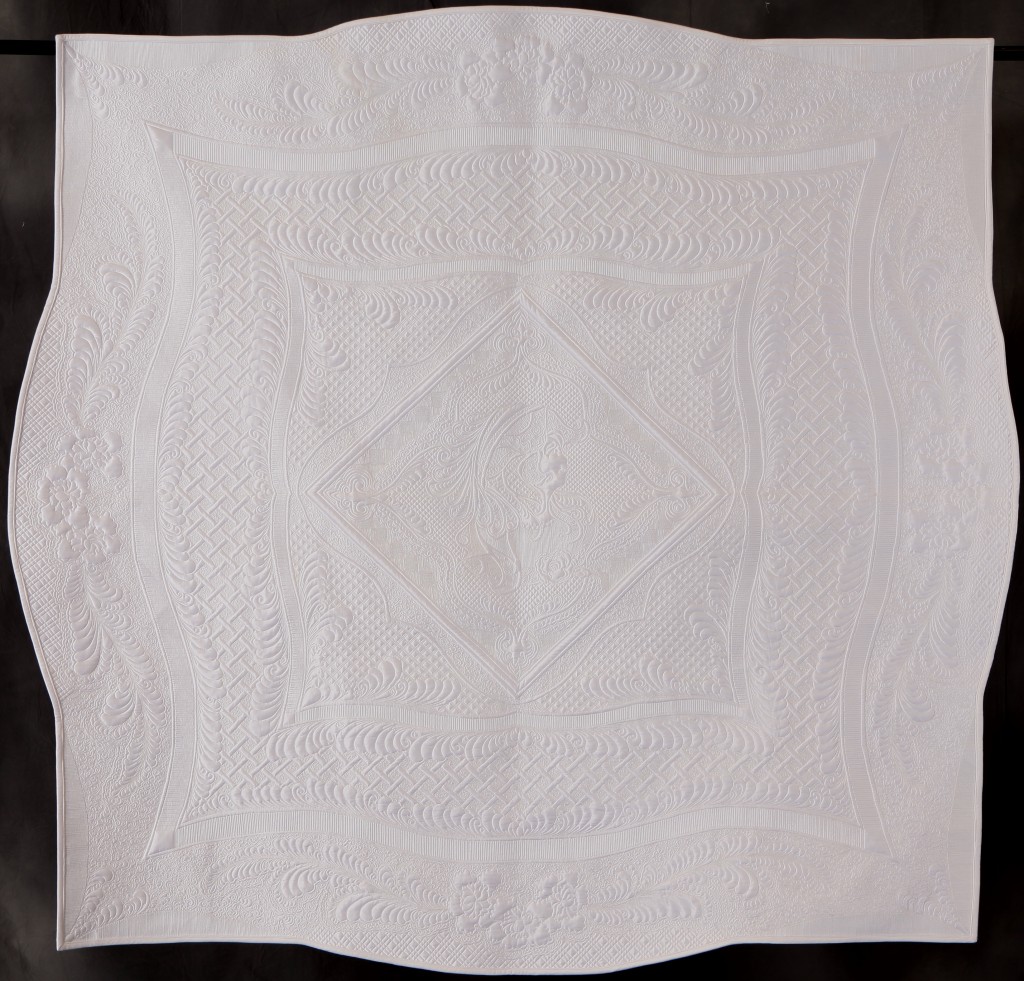 Road to California was a tremendous experience for author, teacher, free motion longarm quilter, Karen Sievert. She taught three of her own classes, substituted for Linda V. Taylor for two of her classes, and found out that she won first place in the quilt contest for Excellence in Longarm Quilting.

Every quilt has a story and Shannah’s Cameo is no different.

Karen Sievert and her husband, Vince, have three adopted children — Wayne, Shannah, and Travis — that were all drug/alcohol babies. Says Karen, “Raising my children, I have learned more from them than they have from me.”

When the kids were younger, they would help out with Karen’s trunk shows and became very familiar with the quilting world. Shannah had asked Karen to write a book and make a quilt named for her. Karen wasn’t interested in writing a third book, but she was interested in making Shannah “just one quilt” especially for her.

Shannah’s Cameo served two purposes: not only was it a gift for her daughter, it also provided the background for teaching a new type of fills class using whole cloth. “Teaching and quilting on whole cloth doesn’t distract the students like a patterned fabric would,” shared Karen.

The focal point of the quilt is a replica cameo of Shannah’s face. A friend digitized Shannah’s image and Karen used different fills for the hair. 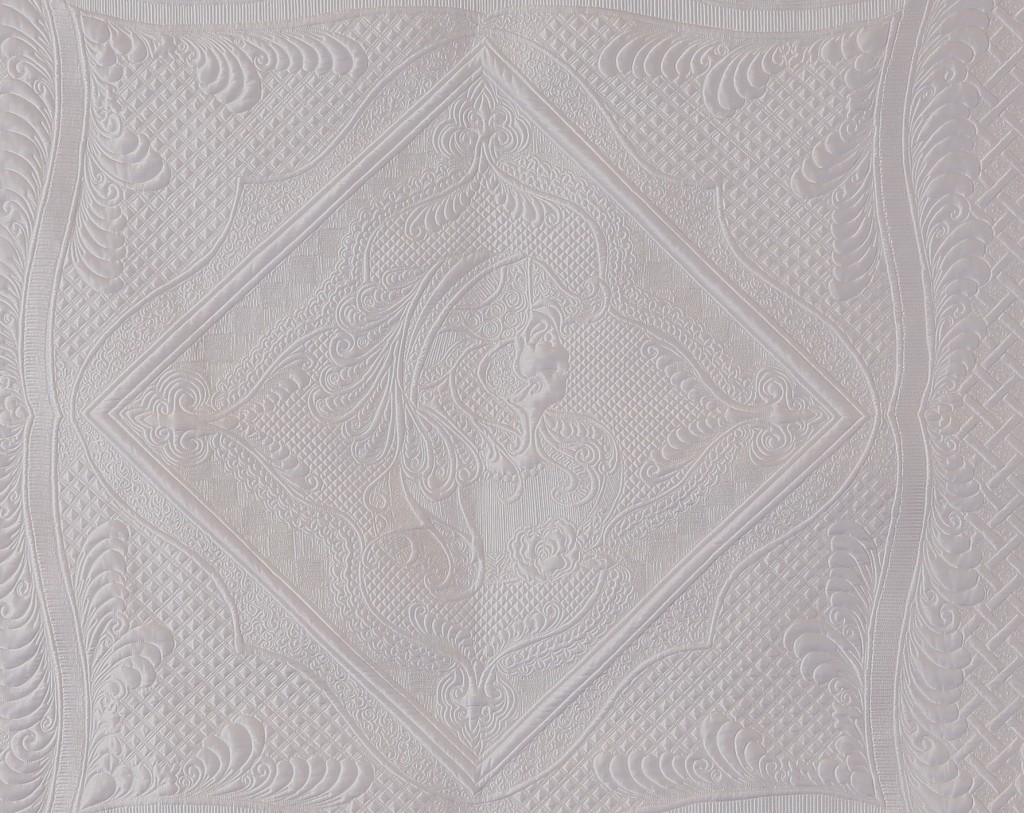 Karen credits Stevii Graves for being the cheerleader behind this project.  It was her support that gave Karen the courage to try new techniques for the quilt that she never would have attempted before. 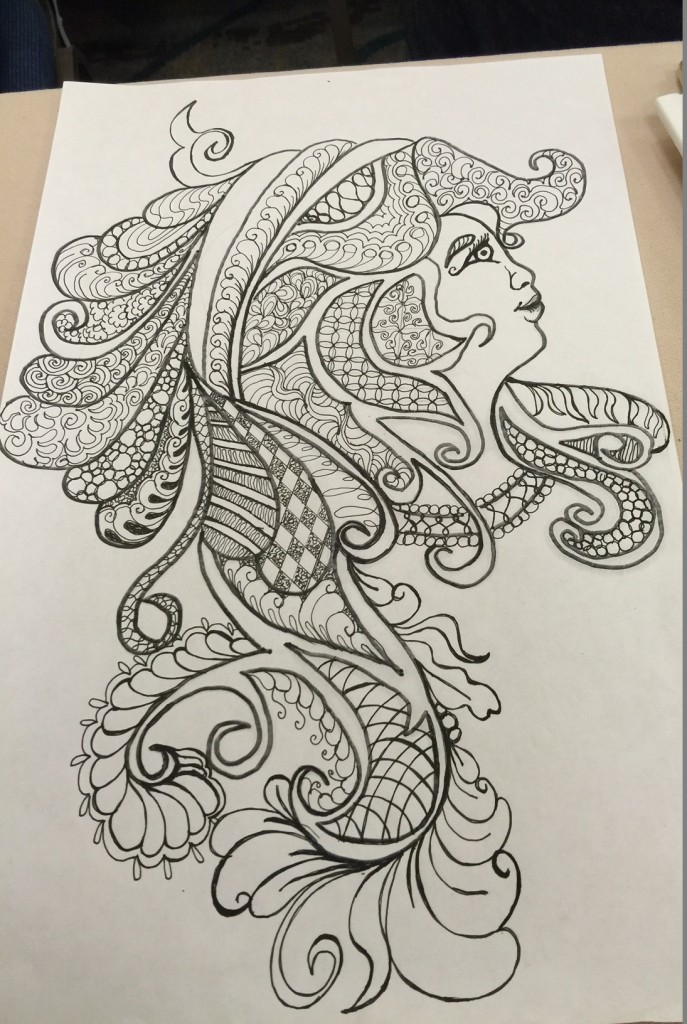 And they practice their own fills in simulating Shannah’s hair.

This technique has led Karen to develop more classes for the future, using different image sketches like a hummingbird to promote the same idea.

What does Shannah think about her quilt?

Karen says Shannah “loves it.” Shannah will be able to keep it after Karen is through showing it,

So You Want To Make A Winning Quilt: Road 2015 Excellence in Longarm Quilting 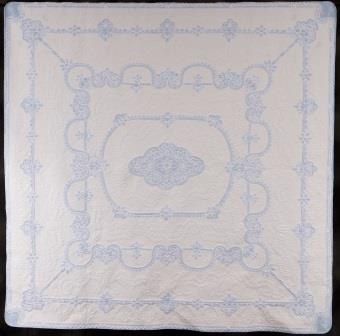 Years ago, when Jocelyn’s family moved to a new town, she decided to join a night class for quilting so that she could meet new people. Jocelyn had wanted to make quilts for a very long time and finally the timing was right. After she made her quilt top, and it was time to do the quilting, Jocelyn struggled. She started out doing the quilting with her domestic machine but her back ached too much. She figured there had to be a better way. Jocelyn did a lot of research on the internet and decided to import a Hinterberg longarm machine. She didn’t want to spend too much money on a machine as she didn’t know if she could or would even like doing longarm quilting. That machine ended up being a really good work horse yet the learning curve was huge. Jocelyn self-taught herself “the hard way,” reading from books and watching videos on YouTube. After a few years, she outgrew the Hinterburg. She knew she wanted to continue and take her quilting to a higher level but she also knew that she would need a new machine to take her there. Jocelyn ended up purchasing a Sharon Schamber 1709 Prodigy in 2009 and she’s never looked back. Matilda was inspired by Jocelyn’s admiration for Battenburg lace. After seeing what Cindy Needham was doing with old linen, Jocelyn decided that that was what she wanted to do with a Battenburg lace bedspread she had purchased. Jocelyn also wanted the project to be challenging and take her out of her comfort zone. Made in 2013, Jocelyn estimates that Matilda took 600  hours to complete. She used a shadow trapunto type technique to put fabric behind the lace, trimming the excess off, then marked the feathers and quilted. The quilt barely fit onto her 10 foot longarm frame. With only a 17 inch throat, there was a lot of rolling. Jocelyn says she learned “patience and discipline and how to fudge the quilting to fit the space.” At the time she was doing the quilting, Jocelyn had a full time job. She would come home from work each night and quilt for 2 to 3 hours. On weekends, she went “hard out.” Over the several months it took to complete the project, Jocelyn’s husband, Steve, showed his support by always cooking the evening meal. He did all the housework too!! When she heard that she had won, Jocelyn was “absolutely thrilled to be recognized by my peers for my workmanship.” With her prize money, Jocelyn “indulged in purchasing threads — quilter’s candy!!” Jocelyn intends to make more competition quilts. She admits that she has many suitable tops to choose from, but it may be a few years before she enters. In the meantime, Jocelyn will continue doing quilting for her customers and of course, continue to learn.]]>