<![CDATA[They share parents, childhood homes, and growing up memories. And today, what could be better than sharing a love for quilting. &nbsp; <p style="text-align: center;">Karla and Karen took Jenny Doan’s class together at Road 2018 as a chance to meet up and

learn some new quilting skills. Karla is a retired teacher living in Alta Loma, California and Karen lives in San Diego. For 15 years when she was teaching, Karla helped her students create 12- block quilts as a memory of all they learned in her class that year. Now that she is retired, Karla uses her free time to take advantage of taking classes at Road for the first time, quilting at home, and embroidering. Karen has been to Road to California 8 times and “absolutely loves it.” 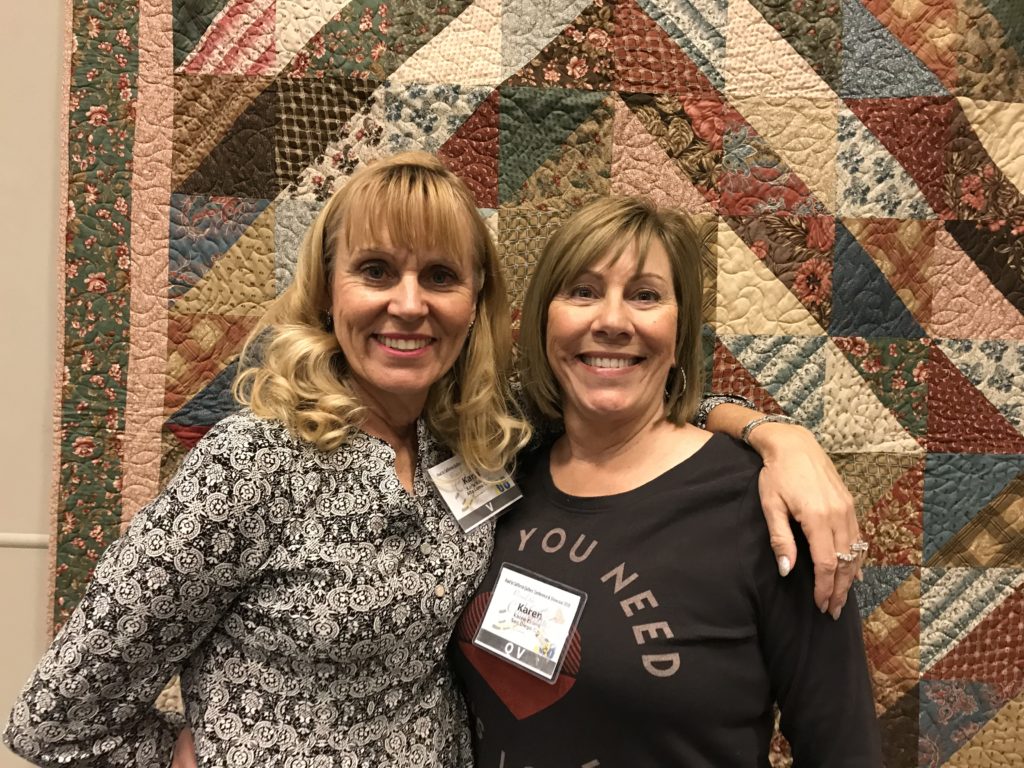 Both sisters were familiar with Jenny Doan and looked forward to taking her class together. Karen watches Jenny’s YouTube Tutorials all the time and was “blown away” at her Trunk Show on Friday night.  Karla has been to Missouri Star Quilt’s home in Hamilton, Missouri twice. She refers to it as “Disneyland for quilters.”

There’s no better place to spend a “Sister’s Week” then Road to California says Cheryl,

Sandy,and DeNese. All three sisters are quilters. DeNese started quilting in 2012 when she retired from Delta Airlines. Cheryl was inspired to start quilting from her mother-in-law. Sandy figured that since her sisters were quilting, she might as well too. They get together two or three times a year to share quilting techniques and go to quilt demonstrations. They enjoy piecing, paper piecing, and collage applique and make quilts for their children and grandchildren. 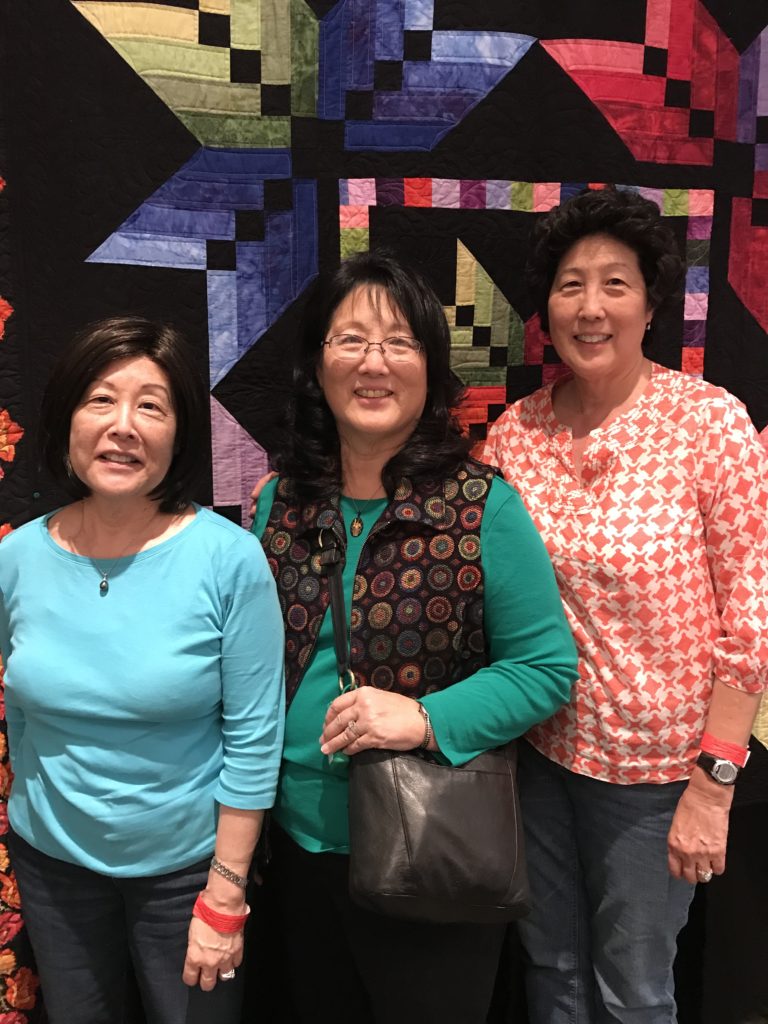 As far as their opinion of Road to California, DeNese, who lives in Utah, said, “It is bigger than anything I have been to and I spent more money than I thought.” Cheryl, who also lives in Utah, said that Road was “Really fun. I thought I would get bored but there were so many interesting things to see.” And Sandy, a resident of Palm Desert, California, commented, “There are lots of gadgets to make quilting easier that I didn’t know existed.”

These three sisters and one sister-in-law all have their roots in Iowa. As quilters, they chose

Road to California 2018 for their “Sister’s Retreat.” Karla lives in Escondido, California and planned their retreat to include Road. Karla has attended five times in the past, but for everyone else, it was their first time. When the Road 2018 class schedule was posted in July, the women were notified that an Aunt had left them money in her will. Karla said “it was a sign” that they should use the money and take classes at Road. They each took two classes plus attended Preview Night and Jenny Doan’s Trunk Show. And of course, they did a lot of shopping!! 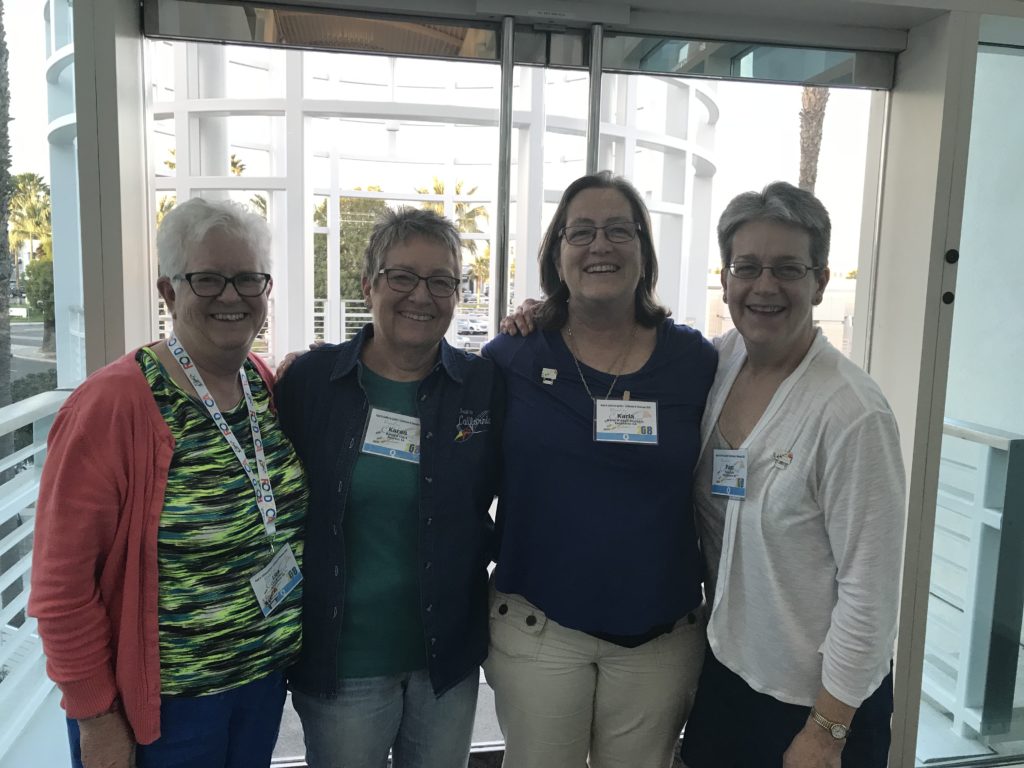 All four are established quilters. Oldest sister Karen, Karla and Pam grew up sewing. Their grandmother taught them how to quilt and they‘ve been quilting for 30 years. Sister-in-law Liza learned how to sew in a 7th grade Home Economics class. Her quilting influence came from her mother and grandmother.  She said that she couldn’t believe “how many people are here” at Road and was excited to see so many other quilters, especially those who had quilts in the show. Will you be bringing a sibling to Road 2019?]]>

This entry was posted on Tuesday, April 10th, 2018 at 3:29 pm and is filed under behind the scenes, Road to California 2018. You can follow any responses to this entry through the RSS 2.0 feed. You can leave a response, or trackback from your own site.

2 Responses to “Siblings That Quilt”