<![CDATA[ <p style="text-align: center;"]]&gt;On Wednesday, Jenny will be teaching along with the <a title="Unique International Flair at Road 2015" href="https://www.road2ca.com/blog/vendors/unique-international-flair-at-road-2015/">Tentmakers of Cairo demonstrators, Tarek Abdelhay and Hosam Hanafy,  3017C Tentmaker Work. Jenny will also be teaching on her own  two day classes on Thursday and Friday,  4501C Shimmering Triangles and on Saturday and Sunday, 6701C Images in Appliqué 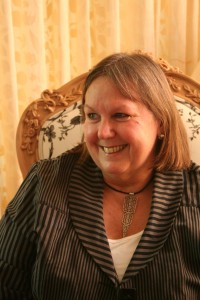 An Australia native, Jenny Bowker’s quilt journey began thanks to her husband’s assignment as a diplomat for the Department of Foreign Affairs and Trade to the Middle East. When her husband first moved to Gaza, Jenny had some time on her hands. She and her children couldn’t join him for about six months as it took that long for them to get into high school there. Her part time job had just run out of funding. And while she had recently finished her full time degree in Visual Arts, she was all “painted out.” How did she fill her free time? Jenny bought some fabric and equipment and decided to make a quilt “just for fun.” Today, much of Jenny’s quilt inspiration comes from living fifteen years in Arab and Islamic countries.

Jenny likes to read and travel and has become an internationally known quilt teacher. She has taught in the USA, Brazil, South Africa, UK, France, Germany, Austria, Belgium, Switzerland, Spain, Portugal, Thailand, India, Singapore, Malaysia, Japan, China, Taiwan, Korea, Dubai, Turkey, Kuwait, Egypt, Libya, Syria, New Zealand and of course, her home country of Australia. She had an exhibition in Malta and taught at the University there this past December. Her biggest trip was when she went to America, worked in California for two weeks, arrived home in Canberra, Australia for three hours and then had to board a plane again for London. 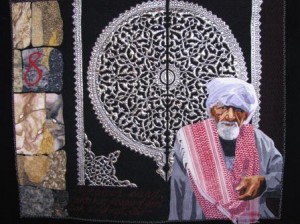 Her favorite class that she has taught was one she gave in Ramallah. It was four intensive weeks teaching three classes each day, six days a week, and all the women she taught ended as patchwork teachers.

Ramallah was also the place for one of her funniest teaching moments. She had a standing arrangement for a cab to collect her for class every morning. One morning it was sleeting – the wind was blowing a mix of snow and ice sideways. If she had waited outside the wall, she was in the snow. If she waited inside the walled area, the taxi would not have been able to see her. So she decided to wait outside. When she finally made it to the class, the organizer explained her situation and scolded her in front of everyone: “You must ask the girls to bring you a chair, and wait inside. Then, with the driver comes, he will make horny noises to you.” Jenny choked on her mouthful of coffee – and worse – she couldn’t even explain why she found this so funny as the organizer was a very proper, elderly Palestinian lady.

What does Jenny like best about teaching? “The lift of joy in the room as students start to get excited about what they are seeing coming together in front of them.” She hopes her students at Road come out of her classes stimulated, excited and invigorated; looking at the whole world differently as they realize that their quilting horizons have just opened right up.

Jenny’s favorite quilting tip is to remember that all the processes of quilting are easy if you consider them as one tiny step at a time. She added, “I give a LOT of tips in my classes.”

To learn more about Jenny, go to her website, jennybowker.com

This entry was posted on Monday, January 19th, 2015 at 2:04 pm and is filed under Faculty, Road 2015- 20th Anniversary Show. You can follow any responses to this entry through the RSS 2.0 feed. You can leave a response, or trackback from your own site.